The Casamaures, listed a “Historic Monument” for 25 years

25 years ago, La Casamaures was listed as a “Historic Monument”.

The “Casamaures d'hier et d'aujourd'hui" association organised a musical afternoon bathed in sunshine, which began with the extraordinary performance of the Grenoble fanfare "Montabul Orkestar".
Then, the "Attitude flamenca" troupe from Saint Martin-d'Hères provided a show to mark La Casamaures’ 25th anniversary as a listed historic monument. The exact date was March 19, 1986, thanks to the lobbying of the Culture Ministry.

Built over four levels in moulded cement, the Moorish-style house is unique in the history of Western construction (see elsewhere). When Christiane Guichard bought it in 1981, it was nothing more than a ruin. She decided to save what in better days had been a magnificent palace.
And she gave it a new name, "La Casamaures".

The struggle began when she had to explain her passionate project to the public authorities.
In order to do this, the owner sought the support of prestigious partners such as Vicat group, the inventor of artificial cement, more commonly called “grey gold”, extracted from beneath Mont Jallat, to the south of the Chartreuse (access via underground tunnels, from Porte de France, at the border between Grenoble and Saint Martin-le-Vinoux). Other supporters included regional and national companies and numerous artists.

Once it was recognised, La Casamaures obtained the Prize for Old French Homes in 1988, the Rhône-Alpes municipal council prize for its contribution to protecting the know-how associated with grey gold…
Since becoming a site for artistic production and visits, La Casamaures is open to groups by appointment. 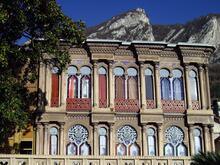