The originality of the mineralogical composition of Prompt natural cement is due to low-temperature firing (600 to 1,200°C) of marl.
Two major families of minerals form:

In contrast to alite (C3S), found in abundance in Portland cements, belite hydrates slowly, over several months and years.

The dicalcium silicate adds hydration potential over time, along with the possibility of “self-repair” of any irregularities, such as micro-cracking, at a very early stage.
This makes it a very important contributor to durability.

This slow hydration of belite raises the potential for the hydrate to develop over time, and also allows the formation of low permeability (Figure 2). After one month, the permeability is the same as for a CEM II 42.5 N mortar after three months. After six months, with a high dosage, the permeability coefficient drops sharply to achieve very low values at 12 months that are similar to those of high performance cements. 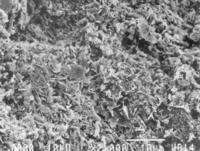 Most of the hydrates formed are very small in size, and highly intertwined. The transition aureoles between the paste and the granulate, which are often highly propitious zones for the transit of damaging solutions, are here fine and of very low porosity, explaining the material’s heightened durability.

As it hydrates, the belite will result in only a very low quantity of portlandite (calcium hydroxide). As a result, dissolution through acid attack is very limited, and the formation of secondary gypsum by substitution with sulphates during a sulphate attack is of little significance. Hence a very limited and non-expansive secondary ettringite formation.

Prompt natural cement mortars and concretes were thus shown to have good resistance to acid water (up to pH 4) and sulphated waters.

The physical properties (low permeability) and mineralogical characteristics of Prompt natural cement concretes and mortars outlined above offer excellent resistance when in contact with sea water.

Performance tests commenced in 1930 at the port of La Rochelle in France (photos). Blocks of natural cement concrete, dosed at 300, 450 and 600 kg/m3 of sand were immersed in the drawdown zone. The 450 and 600kg/m3 concrete blocks were judged to be in fairly good condition by the civil engineering services of La Rochelle in 1986, i.e., 56 years later.

This proven resistance to sea water, combined with its waterproofing properties, its quick setting and rapid make it the ideal binder to apply between two tides. 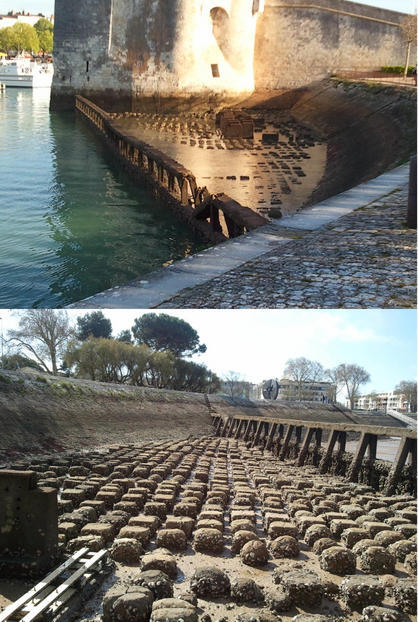