After grinding, the pieces from the underground quarries, of a grade of between 0 and 150mm, are mixed with a set quality of coal before being put into conventional vertical kilns.

The stones are fired in this type of kiln at a low temperature, and over a broad thermal spectrum, between 500 and 1,200°C. This is due to several factors:

The process leader uses different parameters to run the kiln:

He can adjust the kiln operation by altering:

When the material comes out of the kiln, the stones are called “blocks”. They can be categorised into three categories: unburnt, burnt and over burnt (cf. mineralogical characteristics) according to the firing level to which they have been subject. A good natural cement can be identified by a good mixture of these different blocks. With a modern firing process, such as a rotating kiln, it is possible to fire the raw material at control temperatures of, for example, between 800 and 900°C. This produces a cement which remains natural, but whose mineralogy is not representative of the natural cements of the 19th century. The firing process used has remained unchanged since the 19th century. 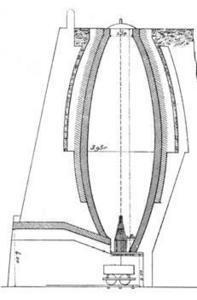