From colour to brick

Everything started with the discovery of polychromy during the digs at Pompeii and Herculaneum.

The 18th century saw the walls of salons and windows and patterns adorning structures inspired by these discoveries.

The period experienced stucco to such a degree that each architect had his own style. Walls and façades were decorated with patterns and shades of refined delicacy.

A second discovery brought colour to walls and façades. Jacques Hittorf, the illustrious architect, revealed in a report following his trip to Sicily in 1823 that three neighbouring temples of the Selinonte acropolis had originally been painted in bright colours. A real revelation!

After Louis XIV, it was agreed that white was for the aristocracy and that colour was vulgar. The stone château and brick stables of Vaux le Vicomte are the perfect illustration of this theory.

The great Renaissance architect Sebastiano Serlio wrote in the “general rules of architecture” on the five forms of construction, published in 1545: “Baked stones are the flesh of the building, and living stones the skeleton that holds it up.” Industry standards would prove that bricks were sometimes more crush-resistant than stone.

The East of France saw the industrialisation of bricks when Charles Dollfus, from Mulhouse, produced a machine that manufactured almost 3,000 units per day, run by a single worker.

The reputation of brick was consummated by the Universal Exhibition of 1889. In Construction Moderne of June 8, 1889, Mr Brincourt wrote: “Iron, clay and ceramic are the elements of a new, original form of construction which is likely to be used in all possible interpretations of this great art, which must reflect all characteristics, strict and light-hearted, rich and simple.”

Brick as an ornament becomes the keystone

The taste for Louis XIII style, so beautifully sung by Gérard de Nerval in his dreamlike evocations, in which we see brick and stone châteaux, surrounded by lawns where young girls dance. Such colours first inspired the hotels of the Parisian district of Parc Monceau, giving rise to the famous checkerboard and lozenge forms. The reign of Napoleon III recalls the Valois period.

Mechanisation permitted the use of brick in large panels, which allowed architects to play imaginatively with materials, colours and planes.

The varied colours of brick opened the way to new materials, and more particularly those whose shades and textures work in counterpoint, and thereby ensure a creative use of light. This took us into a period that combined rationality and symbolism. A façade became the page of a book, reflecting our society.

The Dumas house, at 32 rue Eugène-Flachat in Paris’s 17th district, dates from 1892 and is the work of the great Paul Sédille. The composition of its façade brilliantly illustrates the subtle relationship between brick and decorative elements, dictating the whole in a symphonic style of subtle discretion.

On the first floor, the window of the main lounge is designed and painted like a picture. The protruding balcony with its archivolt mosaics blends into the dark and intense green of the varnished bricks, and the stone acts as a relay, framing and distinguishing the opening. Note  the stone uprights assembled like slightly larger shaped bricks…

Between the windows of the bedrooms on the second floor, a beautiful seated academy points to the workshop on the third floor. This sort of sign may be made in stone. But the architect would only choose stone, plaster or natural cement according to the models and shades he was using. The path widens. The palette is bigger, and the term “industry” takes on its real meaning in the art of construction.

Coming soon: A remarkable example of a natural cement building at the Saint-Merri church in Paris 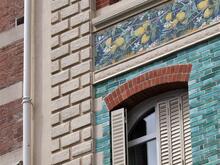